At Union Hearing Aid Centre, we are always trying to connect with patients about upcoming events, new technology, hearing communities and other opportunities.

Also, check out these advertisements which were created for us.

The hearing aid centre created a poster that emits high-frequency sounds and mock-tests pedestrians’ eyes to prove that some require its services.

There’s a Union Hearing Aid Centre poster in Toronto’s west end that’s having a peculiar effect on those in the neighbourhood. Some people walk past with their hands cupped over their ears to evade the semi-sonic frequency being emitted from the board, while other pedestrians – whose hearing is not as sharp – pay little attention to the conspicuously piercing sound.

On the board, an eye chart is featured with copy, such as “If you can read this line, you have at least 20/20 vision,” descending in size. This continues until the copy is small enough for someone with perfect vision to read, and states that while they may have 20/20 vision, they should consider getting their ears checked as the speaker above the board has been blasting a piercing high-frequency sound the entire time.

“People accept that they have an eyesight problem, that’s why you see so many people wearing glasses,” says Robin Heisey, CCO at Draftfcb, the agency responsible for the creative and media placement. “But you try and get a 50-year-old to wear a hearing aid, and they refuse. So how do you get people to test their hearing? Pretend you’re testing their eyes.”

From the poster concept, the agency also developed a TV spot that similarly tests viewer’s eyesight, only to reveal the 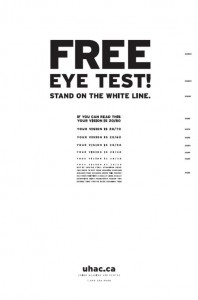 need for them to visit Union Hearing to get their ears tested, says Heisey. The spot is currently airing in Canada, last week, Union Hearing also placed a big box rich media ad on Sympatico.ca to mock-test visitors’ eyes.

“The technology is self-targeting because it really only works if you’re age 35, 40 or more. Otherwise the noise will bug you. Or if you have noise reduced hearing loss [at a younger age], those are the people that are being targeted,” adds Heisey.

The sneaky placement of piercing frequencies in ads isn’t a first for Union Hearing. This time last year, the organization took a similar approach, having Draftfcb create radio and television spots that played sounds of birds chirping and babies laughing, only to overlay them with a high-pitch sound to prove to some listeners the need to get their hearing checked. The spots earned a Silver award at the 2012 Cannes Lions. 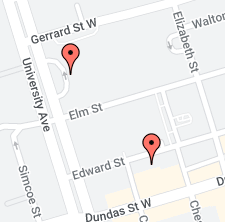